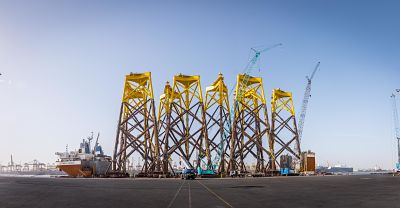 France – Brest – Tuesday 17/09/2019 – 1/4 – energiesdelamer.eu. Ailes Marines, in charge of the development, construction, installation and operation of the Saint-Brieuc Baie offshore wind farm, has chosen the Spanish company Navantia for the offshore construction of 62 wind turbines’ foundations that will equip the wind farm.

The foundations’ technology chosen by Ailes Marines is a three-legged jacket type. This is a steel lattice structure that weighs up to 1.175 tons, can reach up to 74 meters high, and is attached to the sea-bed with piles.

The foundations’ components will be assembled by Navantia on the Brest polder, in a dedicated area of 11 hectares. The whole assembly will take place in Spain, and the port of Brest will again be used for temporary storage before foundations are shipped to the site.

Thus, the polder and its “heavy lift” dock, as well as the other port docks, will be used for reception, precontruction, logistics and components transportation.

This open-air construction site, organized horizontally, will mobilize, between 2021 and 2023, a minimum of 250 full-time jobs over 2 years. Skills required will include: welders, flame cutters, handling operators, scaffolders, quality control supervisors, amongst others.

Hence, both the Region of Brittany and the port of Brest contribute to the development of a new industrial sector: the marine energy sector.

“Ten years; that’s how long it took for this offshore wind farm project to materialize, at an industrial level. In order to achieve this, the Region of Brittany anticipated Ailes Marines’ needs and created a “marine energies” terminal that met the sector’s expectations. We are proud today to welcome Navantia, a company that has much experience in the area. This project is a founding step in the development of a marine energy field in Brittany. A first step that will position the port of Brest as the field’s anchor point on the Atlantic coast, and undoubtedly beyond. This is also the start of a new energy and industrial story in Brittany, one that will be taken over by floating offshore wind power, which should reach our coasts very soon,” said Loïg Chesnais-Girard, President of the Region of Brittany.

“The selection of Navantia for the construction of the jacket foundations on the Brest polder solidifies Ailes Marines’ announced industrial commitments, to building an offshore wind farm in the Baie de Saint-Brieuc. Together with that of wind turbines’, which will be built in the port of Le Havre, this will be the second biggest industrial installation brought about by the Saint-Brieuc project. We are proud that Navantia will be the first occupant of the port of Brest polder and that it will bring a minimum of 250 jobs to Brittany,” said Jonathan Cole , President of Ailes Marines and Director of Iberdrola Offshore Wind Power World.

The chairwoman of Navantia, Susana de Sarriá highlights “ the commitment of Navantia and Windar with this important project, bringing its offshore wind energy experience and know-how to support Ailes Marines and Iberdrola in positioning Brest as a major global wind energy center in Europe”. In that sense she assures “a total collaboration with local industry in the development of new activities and jobs to contribute to the future of the Brittany region.” 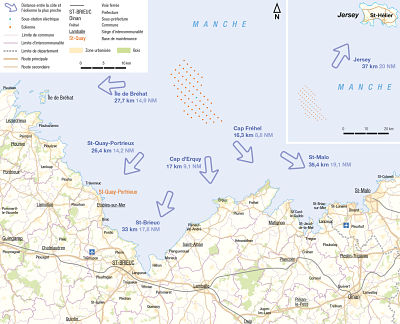 Laureate for the Baie of Saint-Brieuc offshore wind farm project in April 2012, Ailes Marines is in charge of its development, construction, installation and operation of the offshore wind farm. Ailes Marines is a Simplified Joint Stock Company (SAS), respectively held at 70% and 30% by IBERDROLA and AVEL VOR. AEL VOR associates RES and the group Caisse des Dépôts-Banque des Territoires.

1 820 GWh/year production, the equivalent of the annual electricity consumption of 835 000 people (heating included)

About the Region of Brittany and the port of Brest

The Region of Brittany is the owner the port and has used it, since 2017, to carry out an important development project, in order to, on the one hand, increase the maritime traffic and, on the other hand, to develop an industrial terminal mainly dedicated to the marine energy field. Over the 2017-2022 period, the investments amounted to 220 M€, which were financed in large part by the Region but also by Europe (FEDER funds), the Metropole of Brest and Brest City, the Finistère Department and the CCI. For the past two years, earthmoving works have consolidated and prepared the current 40 ha pondler, to welcome the companies. Simultaneously, the construction of the 400 m long EMR dock has started, as well as that of the 900 m long dyke. These infrastructures were joined together to form a new 14 ha compartment which, once backfilled, will extend the polder over a total usable area of 54 ha, by 2024.