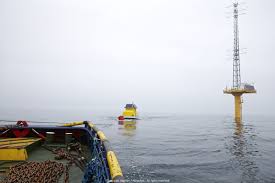 Australie – France – Vendredi 22/11/2019 – Mise en ligne le Jeudi 21/11/2019 – energiesdelamer.eu. The entity set up to deliver Australia’s first offshore wind farm – and the largest yet in the Southern Hemisphere – has appointed a new CEO Casper Frost Thorhauge, (an Orsted veteran and pioneer of Taiwan’s sector) as site tests begin off the south coast of Gippsland, Victoria.

Casper Frost Thorhauge will lead the 2.2GW plan to deploy turbines off the state of Victoria, in what would be the Southern Hemisphere’s largest offshore wind development.

The « Star of the South offshore » wind project has awarded AKROCEAN a contract for its floating LiDAR wind assessment and metocean campaign off the coast of Victoria, Australia. After being entered a few months ago in the Carbon Trust Stage 2 club with the WINDSEA service, AKROCEAN confirms its aim to become a major and international wind and ocean data provider.

The Star of the South received an exploration licence from the Australian Government earlier this year for its proposed offshore wind project located off the south coast of Gippsland, Victoria (Australia). This enables the Star of the South to start site investigations, including wind and metocean assessments.

AKROCEAN is undertaking the wind assessment and metocean campaign with the deployment of two WINDSEA floating LiDARs and one wave buoy on the project site for several years. The three systems are being commissioned over coming days.

WINDSEA Floating LiDAR technology is the first to use a passive stabilization system and wave energy converter to generate clean on-board electricity (GEPS Techno technology). The campaign will be remotely managed by VALEMO through their control center in France (data supervision and systems health) with local support from TEK-Ocean Energy Services, a major service provider to the offshore energy industry, who have qualified staff and vessels and an excellent knowledge of the area. WINDSEA embeds a Windcube Offshore LiDAR unit from LEOSPHERE.

Maxime BELLORGE, projects and sales director at AKROCEAN said: “It is a great satisfaction to support one of the world’s biggest offshore wind developments, especially in Australia where wind potential is huge. With this opportunity, AKROCEAN will demonstrate its ability to provide high quality data collection services overseas.”

Casper Frost Thorhauge; CEO of the Star of the South: “We’re excited to be working with AKROCEAN to collect valuable data on the wind profile and conditions off the coast of Gippsland to help confirm the project’s feasibility and inform early planning.”

Just a few months after receiving its stage 2 Carbon Trust OWA maturity level by DNV-GL, AKROCEAN confirm its position on the Floating LiDAR market. According to Maxime BELLORGE, the French player is involved in other worldwide project opportunities.

Casper Frost Thorhauge succeeds Andy Evans, who lead Star of the South from its earliest days and is now pursuing other ventures in clean energy and leading Offshore Wind Australia, a new business network for the nation’s fledgling sector.