“The prototype of the new autonomous WAVEGEM® platform moored at sea” 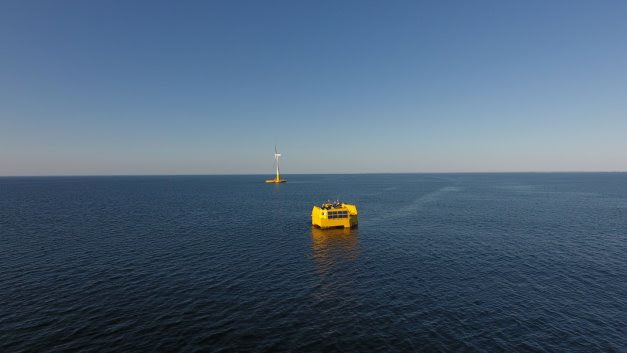 The connection operation of the platform to its 4 anchor lines provided in full by the Le Béon Manufacturing except the anchors provided by Vryhof occurred in less than 6 hours with light means of intervention from the standard of this type of surgery.

The 4 anchor lines that hold the WAVEGEM® platform had been installed in July 2019 at the SEMREV test site during 2 days of operations. This first installation, coordinated entirely by SeRenMar – Ship As A Service® for the maritime part, has highlighted the technology invented by GEPS Techno and in particular the simplicity of the anchoring systems used, thus demonstrating the perfect adequacy between the solutions chosen and the restraints of the targeted markets, namely the open sea far from any heavy deployment means.

« All these maneuvers were performed with two ships and engaged with the exception of laying the anchors by ships of small tonnage which is fundamentally different from the deployment of resources committed by our competitors as OPT or Carnegie. The experience of recovery of these operations will enable us to further reduce the resources committed which is a key point for deployment in very remote areas, « said energiesdelamer.eu to Jean-Luc Longeroche president and co-founder Geps Techno.

The WAVEGEM platform developed by GEPS Techno is an autonomous hybrid energy production platform designed to supply maritime application or remote island which do not have access to the electricity grid and want to be supply by reliable and renewable power source. The platform converts wave energy into electricity using the float’s movements to create a closed circulation of seawater through a low speed turbine.

The 18 months of planned sea tests will validate the performance, the reliability of the installation and calibrate the related conception tools. In the meantime, the platform will also carry out other subsystem tests (new generators, energy storage, etc.), which will benefit from privileged sea test conditions.

On the other hand, the platform will serve as a commercial demonstrator to allow future customers to have a better understanding of the platform’s characteristics and its ability to meet their needs in terms of energy production and also hosting autonomous applications.

The targeted markets are, as auxiliary means of energy production, offshore oil & gas and marine energies but also small islands in combination or not with other power production systems.

This project, started in 2016, brings together 7 French partners, including Geps Techno, the leader of the program, which imagined, designed, built the floater and the energy production system, Ifremer which carried out the tank tests and the environmental survey of the sea trials, SNEF which carried out the auxiliary installations for the floater and the cabling operation, Chantiers de l’Atlantique which supervised the entire construction and coordinated the building logistics operations, Centrale Nantes which provided its test site, Blue Solutions from the Bolloré group which contributed to the definition of the storage system and provided the supercapacitys, Icam for the design and production of a prototype of the wave system. The project is financed by Bpifrance as part of the “Programme des Investissements d’Avenir”, by the Région Pays de la Loire and by the European Union as part of the FORESEA program. It has been certified by the EMC2 competitiveness cluster.