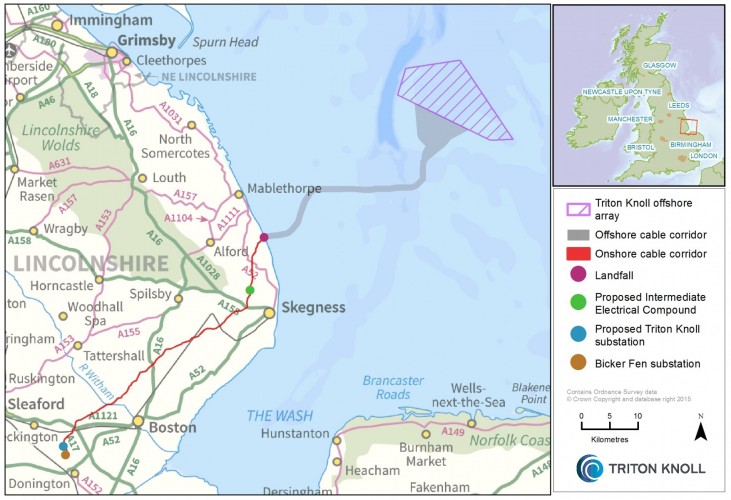 Innogy and Statkraft have completed an agreement under which innogy has acquired Statkraft’s 50 per cent share in the offshore wind project Triton Knoll. With the acquisition of Statkraft’s share, innogy has become its sole owner. Both sides have agreed to maintain confidentiality regarding the purchase price.

Triton Knoll is an offshore wind project with a planned installed capacity of 860 megawatts. Managed by innogy, Triton Knoll has been successfully developed through a joint venture by innogy and Statkraft. On 11 September 2017, the project was awarded a Contract for Difference (CfD) by the UK Department for Business, Energy & Industrial Strategy (BEIS) in the latest auction round to support renewable energy projects.

“With full control over Triton Knoll, we will now develop the project further to final investment decision at our own discretion. In due course, we will also review all options regarding the ownership structure of Triton Knoll to maximise value for our company and our shareholders.” Hans Bünting, Chief Operating Officer Renewables of innogy SE

Triton Knoll is one of the most cost-effective and most competitive offshore wind projects of the latest auction in the UK. The strike price awarded is £ 74.75 per megawatt over 15 years (the strike price is in 2012 prices). The wind farm will be able to supply the equivalent of an expected minimum of 800,000 UK households p.a. with renewable electricity. The planned investment volume amounts to approximately £2 billion (which corresponds to roughly €2.2 billion at the current exchange rate).

The planned wind farm, located 32 kilometres off the coast of Lincolnshire in the east of England, has already been fully consented. The location offers good, proven wind conditions and moderate average water depths of 18 metres.

The final investment decision for Triton Knoll is expected to be made in mid-2018. Until then the financing process will be finalized and contracting agreements completed with the project’s supply chain partners. So far, preferred suppliers for turbines, foundations, substations and offshore cables have been unveiled: MHI Vestas Offshore Wind shall provide up to 90 of its V164-9.5 MW turbines. Furthermore, it is planned to install the turbines and substations on monopile foundations manufactured by a joint venture of Sif Netherlands B.V. and Smulders Projects Belgium N.V. All offshore foundations and two offshore substations are to be installed by MPI Offshore. Onshore and offshore substations are to be supplied by Siemens Transmission and Distribution Ltd, who will also install the onshore substation. A consortium of NKT and VBMS shall supply the offshore cables.

In 2018, onshore works are scheduled to begin to provide the grid connection. Offshore construction is expected to start in 2020. According to current planning, commissioning of Triton Knoll is expected in 2021.

26/09/2017 – Royal Boskalis Westminster N.V. (Boskalis) subsidiary VBMS has signed a Preferred Supplier and Early Works Agreement for the supply and installation of the export and inter-array cables for the Triton Knoll offshore wind farm (OWF), UK. The project will be executed in consortium with NKT Cables.