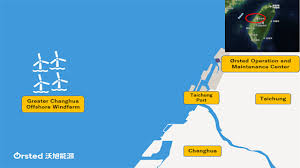 TSMC, the world’s largest semiconductor foundry, is also a world-leader in green manufacturing. With this CPPA, TSMC once again demonstrates its long-term commitment to environmental sustainability.

J.K. Lin, Senior Vice President of Information Technology and Materials Management & Risk Management at TSMC, says: “TSMC is happy for this opportunity to collaborate with Ørsted and not only expand the adoption of renewable energy, but also to work towards Taiwan’s energy transition to build world-class industrial environment. As a corporate citizen, TSMC is taking ‘green action’ to carry out our responsibility to environmental protection.”

Under the agreement with TSMC, the Greater Changhua 2b & 4 offshore wind farm will receive a price for power including T-RECs (Taiwan renewable energy certificate) during the 20-year contract period that is higher than the feed-in-tariff which was originally secured via the outcome of Taiwan’s first offshore wind auction in June 2018. This improves the project’s financial viability and helps Ørsted mature Greater Changhua 2b & 4 towards a final investment decision.

Martin Neubert, Executive Vice President and CEO of Ørsted Offshore, says: “We commend TSMC for their leadership in renewable energy sourcing and for taking tangible action to deliver on their ambitious greenhouse gas reduction targets. By sourcing renewable energy at an unprecedented scale, TSMC demonstrates strong support for the development of renewable energy. Signing the largest-ever corporate PPA with the world’s leading semiconductor company shows that Ørsted is a trusted renewable energy partner for corporates and governments.”

Matthias Bausenwein, President of Ørsted Asia-Pacific, says: “The agreement between Ørsted and TSMC signed today underlines Ørsted’s pioneering role in the development of renewable energy in the Asia Pacific. In Taiwan, we are already constructing the Greater Changhua 1 & 2a offshore wind farm. Combined with our Greater Changhua 2b & 4 project, which is now one step closer to a final investment decision, we are making offshore wind a cornerstone in Taiwan’s transition from fossil-based to renewable energy.”

The information provided in this announcement does not change Ørsted’s previous financial guidance for the financial year of 2020 or the announced expected investment level for 2020.

About Greater Changhua 2b & 4

Greater Changhua 2b & 4 will be Ørsted’s third offshore wind farm in Taiwan, subject to final investment decision which Ørsted expects to take in 2023. The wind farm will have a capacity of 920MW and will be located in the Taiwan Strait approx. 50 km off the coast of Changhua County.

Taipower, Taiwan’s transmission system operator, will be building new transmission grid to accommodate for Taiwan’s buildout of offshore wind. With the current grid construction timeline, Taipower is expected to provide Greater Changhua 2b & 4 with grid access in late 2025. Ørsted expects to generate the first power from Greater Changhua 2b & 4 shortly thereafter and to fully commission the wind farm in 2026.