France – Scotland – Tuesday 07/07/2020 – energiesdelamer.eu. Naval Energies has just joined the DeepWind offshore wind cluster as part of its strategy to offer floating wind technology into the Scottish market for the ScotWind leasing round recently announced by the Scottish Government.

Scotland is aiming to be carbon neutral by 2045, with offshore wind as a key ingredient in its energy mix, as evidenced by the launch of the large-scale ScotWind Leasing Round.

To support this ambition, a strong, dedicated supply chain is essential. This has been achieved by the creation of a new industry body, the DeepWind cluster, with the main objective of developing a significant offshore wind energy supply chain. It is also tasked with encouraging innovation and, more generally, economic growth through the development of the offshore wind sector. Created in April 2019, it brings together more than 340 members from industry, academia and the public sector with the aim of increasing the competitiveness and capability of the Scottish supply chain. It is to help further this aim that Naval Energies joins the DeepWind cluster. 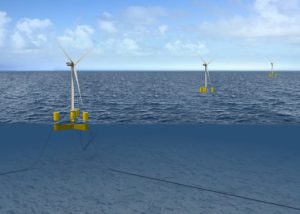 Laurent Schneider-Maunoury, Chairman of Naval Energies said: « Naval Energies, a strategic player in floating wind, will bring its expertise to future Scottish projects. Belonging to DeepWind, an accelerator and facilitator, will enable us to work with other partners and thereby fostering growth and synergies, in a collaborative spirit for the deployment of offshore wind in Scotland. »

Naval Energies thus joins in the development of the floating wind sector in Scotland, where the company will be able to offer its semi-submersible floater. Among the advantages of its technology: a modular and versatile design that can be adapted to the many players involved in the ScotWind leasing round and an industrialization as close as possible to the area of operation, which allows for a high level of local content, which is particularly expected in the context of these calls for tenders.

Paul O’Brien, Senior Development Manager at Highlands and Islands Enterprise and Cluster Manager for DeepWind, said: “It’s great to welcome a leading French floating wind technology developer such as Naval Energies to DeepWind. As the UK’s largest offshore wind industry body, DeepWind has attracted the cream of the international floating wind companies involved in bidding into this new ScotWind round and Naval Energies is a valuable addition to their ranks.”

The Scottish Government, through Crown Estate Scotland which is responsible for the management of the seabed in Scotland, officially launched the offshore wind round, ScotWind, on 10th June. This new round is aiming to reach a capacity of up to 10 GW over a maritime area of approximately 8,600 km2. It is intended for both bottom fixed and floating offshore wind projects but with a focus on floating projects as the majority of the areas offered are in water depths greater than 60 metres.

DeepWind is one of the eight clusters formed as part of the Offshore Wind Sector Deal, which itself is part of the UK’s Industrial Strategy. The DeepWind Cluster is currently being managed by Highlands and Islands Enterprise, in partnership with Scottish Enterprise, as it has a hub and spoke approach that covers both enterprise company areas.