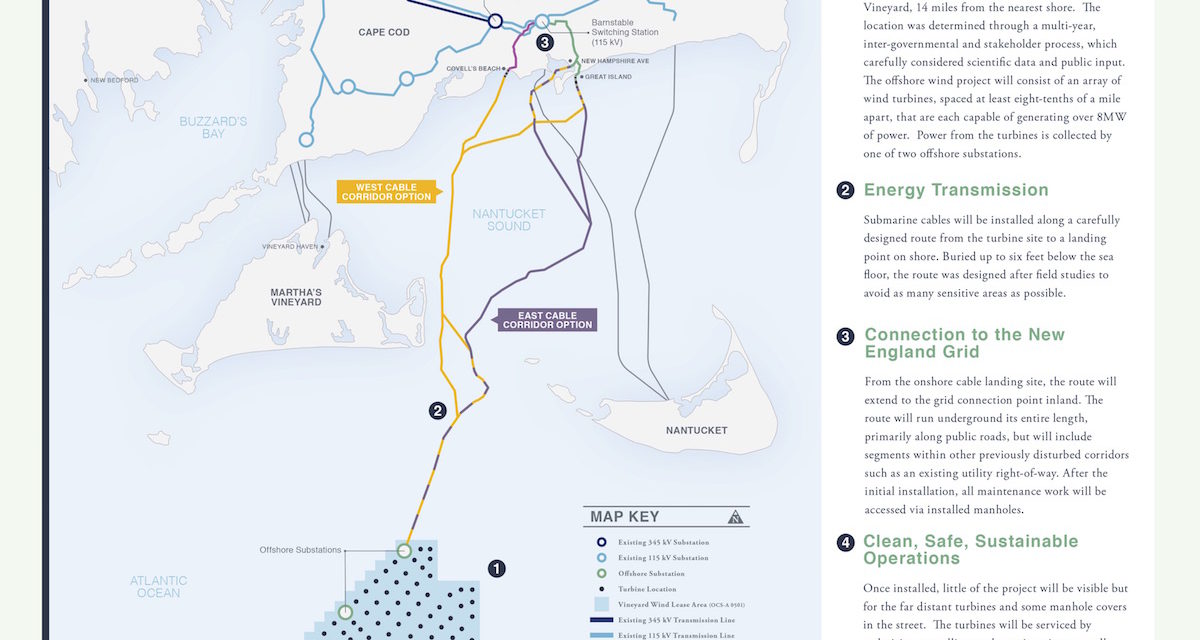 (New Bedford, MA; August 12, 2019) – Vineyard Wind today announced that company shareholders have affirmed a commitment to deliver a proposed 800-megawatt (MW) wind farm off the coast of Massachusetts, albeit with a delayed project schedule. This decision follows the August 9th determination by the United States Department of the Interior (DOI) to significantly delay publication of the Vineyard Wind 1 project’s Final Environmental Impact Statement (FEIS) and to instead undertake a supplemental draft Environmental Impact Statement process. In public statements, the United States Bureau of Ocean Energy Management (BOEM) has indicated the supplemental process is needed to examine the effects from the many offshore wind projects that are expected to follow development of the Vineyard Wind project.

“We are very proud of the Vineyard Wind team’s achievements so far and we are disappointed not to deliver the project on the timeline we had anticipated,” said Lars Pedersen, CEO of Vineyard Wind. “We were less than four months away from launching a new industry in the United States, so we thank the more than 50 US companies already awarded a contract or currently bidding on contracts, the financial institutions engaged in raising more than $2 billion in capital, and the first-class, global contractors that have joined us in planning for the first large-scale offshore wind farm in America. We remain committed to delivering that ambitious target and would like to thank Governor Baker, the Massachusetts legislature and our bipartisan backers in Congress led by the Bay State delegation for their collective support and courage in driving this industry forward.”

“We appreciate all the support and hard work from our community partners, from the Vineyard to Barnstable, to New Bedford, to the labor unions and environmental groups,” said Erich Stephens, Chief Development Officer. “We want to assure each of them that we remain committed to moving this project forward as quickly as circumstances allow, and realizing the many benefits that were so close at hand before federal regulators announced their decision.”

Publication of the FEIS was one of the final steps for Vineyard Wind 1 in the federal permitting process, representing an important milestone to cap a comprehensive public and regulatory review process that began in 2017, and had since been targeted for completion by August 16th.  The review process has encompassed evaluation by more than 25 federal, state, and local regulatory agencies and commissions.

Vineyard Wind has not yet received any documentation as to the requirements for the expanded analysis that BOEM indicated in a public statement issued on August 9th. However, it is clear that the timing of such an analysis is not compatible with the original timeline that has been communicated to Vineyard Wind since March 2018, which Vineyard Wind used to build its delivery schedule. With this development, the shareholders must revise the project as the original timeline is no longer feasible.

With 3,600 jobs, a $2.8 billion investment in new infrastructure, contracts with shipyards in the Gulf Coast and the northeast and much more hanging in the balance, Vineyard Wind represents an immediate opportunity to share the benefits of American offshore wind development with ratepayers and blue-collar workers. The Vineyard Wind project will reduce carbon emissions by over 1.6 million tons per year, the equivalent of removing 325,000 cars from state roads, once operational. Vineyard Wind’s commitment to protection of marine habitats includes a historic agreement to protect the Right Whale between the project, the Conservation Law Foundation, the Natural Resources Defense Council, and the National Wildlife Federation.

Vineyard Wind has contributed significantly to the new US offshore energy industry’s momentum that has grown in recent years to create thousands of new, well-paying jobs, and this drive will now be slowed, diluting significant opportunities. However, Vineyard Wind will continue to work with other U.S. offshore wind developers to help confront the challenge to this nascent offshore energy industry, and urge adoption of a reasonable, productive regulatory approach that integrates analyses for individual projects in a deliberate and coherent fashion.

Since filing its Construction and Operations Plan (COP) with BOEM, Vineyard Wind’s efforts have been informed by Executive Order 13807, issued by the Trump Administration in August 2017, which created the One Federal Decision (OFD) policy. As the first privately proposed major energy infrastructure project subject to OFD, state and federal regulators worked closely with Vineyard Wind to ensure that efficient permitting of the project would feature a clear, transparent and coordinated timeline established by DOI to finalize environmental reviews and authorization decisions.

With that approach, Vineyard Wind remains the most advanced offshore wind project in the United States with a robust supply chain in place and ready to move forward, as well as key permits and approvals from:

Vineyard Wind LLC is an offshore wind development company seeking to build the first large-scale offshore wind energy project in the US, to be located 15 miles south of Martha’s Vineyard. Vineyard Wind, based in New Bedford, Massachusetts, is 50 percent owned by funds of Copenhagen Infrastructure Partners (CIP) and 50 percent by Avangrid Renewables. For more information, visit www.vineyardwind.com.