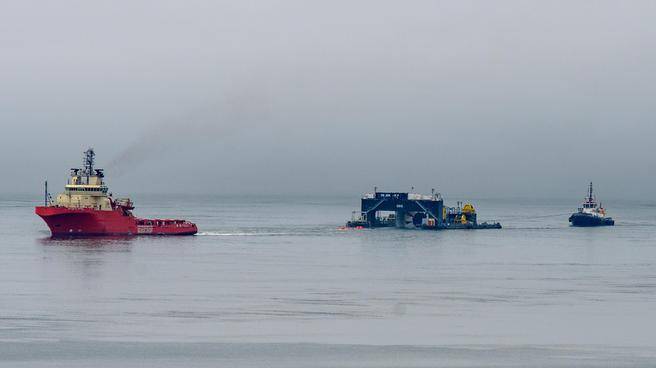 Canada – Monday 06 08 2018 – energiesdelamer.eu. It’s a tall order for a sheriff: arrest a turbine control center at the bottom of the Minas Passage. 04/08/2018 – Excerpts from Aaron Beswick’s article originally published in Halifax by The Chronicle Herald.

A warrant filed with the federal court on behalf of a German shipping company calls on them to do so.

“It is unusual to have a warrant on a cargo 37 meters below the sea’s surface,” said Marc Isaacs*, the attorney who filed the claim on behalf of BBC Chartering Carriers GMBH & Co.KG.

“We will have to figure that one out.”

There’s a lot of figuring out left to be done as a result of the 1,000 tones tidal turbine placed on the floor of the Minas Passage by the Ireland-based OpenHydro group of companies that was placed into receivership a week later….

RMI Marine Ltd. of Eastern Passage is one of those companies and its claim may be easier for the sheriffs to enforce. According to affidavits, it is owed $447,719.14 for diving services and providing a vessel for the preparation and installation of the two-megawatt tidal turbine.

It is seeking the arrest of the 1,293-tone barge Scotia Tide, purpose built in Pictou by Aecon Fabco two years ago to raise and lower the turbines at the Fundy Ocean Research Centre for Energy near Parrsboro.

According to Transport Canada’s registry of vessels, the barge, currently at the Port of Saint John, is owned by OpenHydro Technologies Canada Ltd.

The Turbine, however, is owned by Cape Sharp Tidal, according to Stacey Pineau, a spokesperson for Emera …

Beyond the legal quagmire is the fact that the turbine has been spinning at the bottom of the Minas Passage since July 22. The two-megawatt, 16-metre diameter turbine is meant to be a test for whether an array of such devices could be an economic way to generate green power without having a drastic effect on the marine life that use areas of high tidal energy as highways between feeding and spawning grounds….

The turbine was left in an open circuit, so it is not generating electricity. And the high-tech array of equipment affixed to it to monitor how marine life behaves around it is not operating, either.

That means the clock is ticking on the 18-month dispensation granted by Fisheries and Oceans Canada to Cape Sharp to operate a facility that may kill fish. That dispensation demands that it not a go without environmental monitoring at any point for more than two weeks.

There was a platform built for just such an eventuality.

It is dubbed the FAST 3 and according to correspondence between the Department of Environment and an area resident, the Fundy Ocean Research Centre for Energy has been engaged to launch the platform.

“It is our understanding that (receiver) Grant Thornton (Michael McAteerand Stephen Tennant of Grant Thornton as joint provisional liquidators to the Dublin based OpenHydro Group Ltd and its subsidiary Open Hydro Technologies Ltd*) has initiated discussions with staff recently released by OpenHydro to re-establish a small team for operations here in Nova Scotia,” reads the email.

“This team could be in place and in Nova Scotia as early as next week and would then work to undertake these activities.”

Marc Isaacs* is also president of the Canadian Maritime Law Association and an adjunct professor at the University of Toronto.

edited to The Chronicle Herald