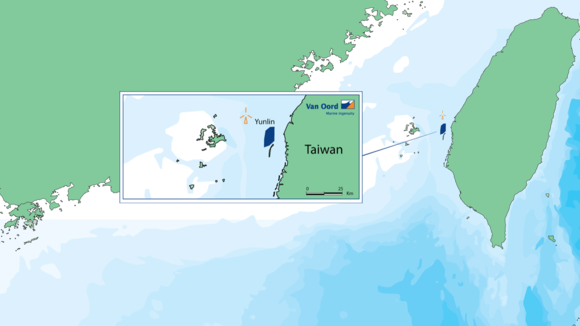 The Yunlin project, located eight kilometers (five miles) from shore, has a contract value of approximately $580 million and is being developed by the Germany’s wpd. Van Oord is responsible for the design, manufacturing and installation of the windfarm’s 80 foundations.

The offshore wind strategy of Taiwan is driven by the desire to phase out nuclear energy. High wind speeds, manageable distances in terms of coastal and water depth and a progressive government policy make offshore wind an attractive energy alternative. The aim of the Taiwanese government is to install 5.5 GW of offshore wind projects by 2025. The Yunlin project is part of the Taiwanese government’s feed-in tariff (« FIT ») programme. This means that it is connected to the Taiwan network and allows a long-term power contract of 20 years. In 2020, about 350 MW must be connected to the grid, with the remaining part following in 2021.

2018-04-30 – Reuters and Maritime Executive and Taiwan announced the results of its first major offshore wind farm auction at the end of April with wpd awarded one GW of capacity and Ørsted 900MW.

The Yunlin project is the first Van Oord offshore wind project in Taiwan and also its first wind contract outside Europe. However, Taiwan is familiar territory due to previous dredging and offshore projects. At the end of 2017, Van Oord completed one of Taiwan’s largest land reclamation projects with the creation of 250 hectares of new land in the Port of Kaohsiung.

Taiwan announced the results of its first major offshore wind farm auction on Monday with Germany’s wpd awarded one GW of capacity and Ørsted 900MW. The nation aims to add 3.8GW of capacity to its existing network of just eight MW.

As a result of the auction, Ørsted’s 605MW Changhua 1 and 295MW Changhua 2 projects are expected to be operational in 2021. These will be the first large-scale commercial offshore wind projects in Taiwan’s Changhua region and will connect 900MW into Changhua’s total available grid capacity of 1,000MW.

Ørsted has obtained site exclusivity on four offshore wind sites located between 35 and 60 kilometers (22 and 37 miles) from shore off Changhua County. The four sites, which have a total potential capacity of 2.4GW, received environmental impact assessment approvals in February 2018.

Formosa 1 is a joint venture between Ørsted (35 percent ownership), Taiwanese developer Swancor Renewable (15 percent), and Macquarie Capital (50 percent). The project has signed a contract with Siemens Gamesa for 20 6MW turbines and a full-service agreement for 15 years. Additionally, Formosa 1 signed a contract with the Taiwanese company Fortune Electric for an upgrade of the existing onshore substation.

Taiwan’s government has announced that it expects to auction up to 2GW of offshore wind capacity in June 2018, and this is expected to grow to 5.5GW by 2025 when nuclear power has been completely phased out.

Taiwan is not considering companies from China as it claims Taiwan as Chinese territory. According to a Reuters report, Chung-Hsien Chen, director of the energy technology division at Taiwan’s Bureau of Energy, said Chinese bids were excluded “due to concerns of national security.”