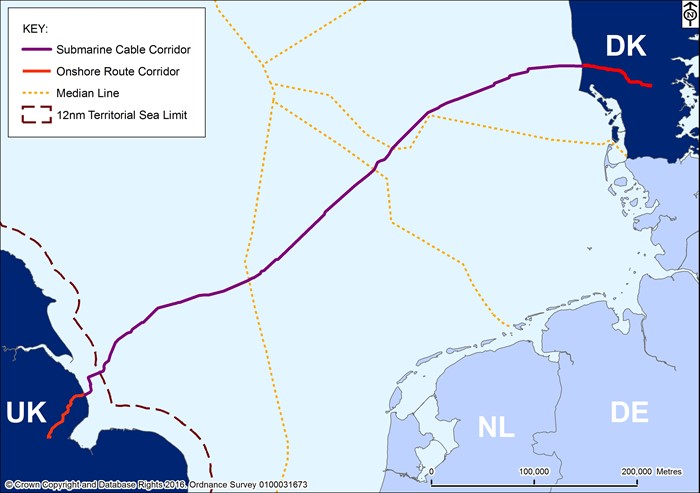 Italy - UK - Denmark - Wednesday -   07/24/2019 – energiesdelamer.eu - Prysmian Group has received a letter of award from National Grid Viking Link Limited and Energinet, for the development of Viking Link, the first submarine cable connection between the UK and Denmark.

Worth close to €700 million, the contract includes the turn-key design, manufacture and installation of the world’s longest interconnector with the entire 1,250 km cable for the submarine route and all of the approximately 135 km of land cables on the UK side, for the 4 out of 5 Lots awarded.

The High Voltage Direct Current (HVDC) interconnector will operate at ± 525 kV DC and will allow up to 1,400 MW of power to be transferred between the two countries passing through UK, Dutch, German and Danish waters, using single-core, mass-impregnated paper-insulated cables. The HVDC cable system will connect the converter station located at Bicker Fen in Lincolnshire, UK, to the converter station located at Revsing in southern Jutland, Denmark, with the aim of increasing access to renewable and sustainable energy sources to more than 1.4 million households, reducing the cost of electricity in the UK and providing additional system reliability.

All cables will be manufactured at Group’s centre of excellence in Arco Felice (Italy). The offshore cable operations will be performed using Prysmian’s new cutting-edge installation vessel, which will be the most capable in the market. With an investment in excess of €170 million, this strategic asset will reinforce Prysmian’s approach as a one-stop-shop solution provider, able to offer enhanced project flexibility thanks to its advanced features. Commissioning of the project is scheduled for the end of 2023.

Viking Link will include approximately 630 km of submarine high voltage direct current (DC) cables which will pass through the Exclusive Economic Zones (EEZs) of Denmark, the Netherlands, Germany and Great Britain in the North Sea.

Marine licence applications for the Viking Link Offshore Scheme were also submitted to the following National Competent Authorities (NCAs) in other territories: